Recently we spent some time contributing to dib-lab/eelpond (renamed to elvers), an executable Snakemake workflow for running the eelpond mRNAseq workflow.

In the process of tracking down a confusing bug in the Snakemake workflow, we used Snakemake's ability to print a directed acyclic graph (hereafter referred to as a dag) representing its task graph. Snakemake prints the dot notation to stdout.

(The graph representation ended up identifying the problem, which was two task graphs that were independent, but which were not supposed to be independent.)

When creating the Graphviz dot notation, Snakemake is kind enough to direct all of its output messages to stderr, and direct the dot graph output to stdout, which makes it easy to redirect stdout to a .dot file and process it with Graphviz.

Github user @bluegenes (the principal author of elvers) added a --dag file to the run_eelpond script, which asks Snakemake to print the dag when it calls the Snakemake API:

This .dot file can then be rendered into a .png file with another command from the command line,

But here's the problem: While this is a simple and easy way to generate the dag, it introduces some extra steps for the user, and it also prevents us from being able to print anything to stdout before or after the dag is generated, since anything printed out by the program to stdout will be redirected to the final dot file along with all the Graphviz dot output.

So how to avoid the extra steps on the command line, while also improving the flexibility in printing to stdout (i.e., only capturing Snakemake's output to a file)?

Can we add two flags like --dagfile and --dagpng that would, respectively, save the task graph directly into a .dot file, or render the dot output from Snakemake directly into a png using dot?

We implemented precisely this functionality in dib-lab/eelpond PR #73. To do this, we utilized a context manager to capture output from Snakemake. In this post we'll cover how this context manager works, and mention a few other possibilities with context managers.

What is a context manager?

If you have done even a little Python programming, you have probably seen and used context managers before - they are blocks of code that are opened using a with keyword in Python. For example, the classic Pythonic way to write to a file uses a context manager:

It's a general concept with a lot of different applications. We cover how to use it to capture output to sys.stdout below.

What is Graphviz dot?

We mentioned that Snakemake can output visualizations of workflows in Graphviz dot format. For the purposes of clarity we explain what that format is here.

Without getting too sidetracked, Graphviz dot defines a notation for drawing graphs, and provides software for laying out the graphs in rendered images.

The user specifies the nodes and labels and edges, as well as formatting and layout details, and dot takes care of laying out the graph.

Here's an example of a simple graph in dot notation:

To render this as a .png image, 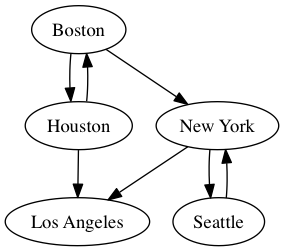 This tool makes visualizing workflows a breeze, as the flow of tasks is much easier to understand and troubleshoot than the convoluted logic of Snakefile rules. Here is an example from elvers:

In elvers, the run_eelpond command line wrapper that kicks off the workflow is a Python script that calls the Snakemake API (we covered this approach in a prior blog post, Building Snakemake Command Line Wrappers for Workflows).

This Python script has a call to the Snakemake API; here is the relevant snippet:

Most of the code that comes before this API call is processing the flags provided by the user. We want to have the flexibility to print to stdout while processing flags, before we get to the Snakemake API call; and we want those messages to be kept separate from the dag output.

We can do this by recognizing that any Python program printing to stdout uses sys.stdout under the hood to send output to stdout - so if we can somehow tell Python to swap out stdout with a string buffer that has the same methods (print, printf, etc.), run Snakemake, then replace stdout again, we can isolate and capture all stdout from the Snakemake API call.

The strategy for our context manager and the entry and exit methods, then, is clear:

Now we are ready to make our context manager object.

But wait! What kind of object are we using? Do we need some kind of special context manager class? Nope! This is one of the features of context managers that makes them magical:

Any object can be a context manager.

In our case, we are capturing stdout from Snakemake so that we can potentially process it, and then dump it to a file. We don't know how many lines Snakemake will output, so we will replace sys.stdout with a string buffer. But once the context closes, we want all those strings in something more convenient, like a list.

So, we can define a new class that derives from the list class, and just adds __enter__() and __exit__() methods, to enable this list to be a context manager:

(Note that we include the constructor, since we need the context manager to have a state so that we can restore the original runtime context to the way it was when we're done.)

The constructor is where we process any input arguments passed in when the context is created.

Given that we want our context manager to handle the case of a directed acyclic graph by capturing stdout, and do nothing otherwise, we should have a flag in the constructor indicating whether we want to pass stdout through, or whether we want to capture it.

Here is the constructor:

When we open the context, we want to swap out sys.stdout with a string buffer. But we also want to save the original sys.stdout object reference, so that we can restore the original runtime context and let the program continue printing to stdout after Snakemake is done.

To clean up, we will need to restore sys.stdout using the pointer we saved in __enter__, then process the string buffer.

We can also use the del operator to clean up the space used by the buffer object once we've transferred its contents.

To see the context manager in action, let's go back to the snippet of code where we call the Snakemake API:

Once we have closed the runtime context, our variable output is a list with all the output from Snakemake (assuming we're creating a dag; if not, everything is passed through to stdout like normal).

The last bit here is to handle the three different dag flags: --dag, --dagfile, and --dagpng.

Note that before the Snakemake API call, we also check whether dot exists:

Now we're ready to run the workflow. We can use the -w flag to list all workflows, then use the -n flag to do a dry run.

We'll use the kmer_trim workflow target:

Now we can create a dag for this workflow target:

Finally, we can use the --dagpng flag for instant gratification:

Note that you can add a line rankdir=LR; to your dot file to change the orientation of the graph (left-to-right order makes highly-parallel workflows vertically stretched, so they are eaiser to view).

and here is the result:

Actions requiring temporary contexts, which are a bit like self-contained workspaces, are good candidates for context managers. Following are a few examples and references.

iPython notebook and matplotlib figure management: Camille Scott has a blog post covering a way of managing large Jupyter notebooks with lots of figures using context managers. In this case, the context that is being set up and torn down is a matplotlib plot context, and it is creating each plot, saving it to a file, then closing the plot. This makes the notebook a lot faster than trying to render every single plot, and makes it a lot cleaner than littering the code with manual figure and axis management.

Here is the context manager, which again uses the decorator + generator approach rather than the class approach:

(Link to file on Github)

The context manager is a convenient way of creating a copy of an existing MySQL connection, then closing it when the requesting method is finished using it.